that's my goal this week.
to eat as "clean" as possible.
I am still working on getting back on track.
I have "excuses".
no money to buy more "healthy food"
no time to prepare healthy meals
no time to get to the gym
blah blah blah

so last night..
I chopped veggies and bagged them so I can grab a bag and go
I made salsa to go with my veggies, or eggs, or whatever I love homemade salsa! mmm
this means no fattening dip! :)

I spooned out tablespoon portions of almond butter to go with veggies
I hard boiled eggs for the week, so much easier to grab and go when they are already in a bowl ready to go.

I visited the farmers market last week and got tons of tomatoes, green beans, squash and zucchini. mmmm
I love to just cut a tomato and eat it.

I have been looking for recipes for the zucchini and squash.. but so far have only used them in my egg cups. I put an egg, some grated squash and zucchini and some green pepper in muffin tins and baked them for a bit. they popped out so yummy!! I also have those for breakfast so I don't have to worry about grabbing junk.

I think I am off to a great start. I only hope I can stick with it again. lol
I have gained at least five pounds since falling off the "no grain/carb" train. I feel like shit! seriously. shit.

I have learned my body does not like grains, or carbs, or whatever is in bread, pasta etc.. it may have to do with my many "excuses" for not previously exercising or eating right.. like Ankylosing spondylitis.. or Fibromyalgia, or Irritable bowl disease. or migraines.. or pinched nerves in my neck and back (which by the way are now causing leg issues) yay.
anyways...

no more excuses.
I have found what actually works for me. And makes me feel good inside. and out.
I am going to remember the bloating and icky feeling every time I want a "treat" that isn't so good for me.

I am going to get back to the gym. get my WOD on !


My father in law has been in and out of the hospital the last couple months. he is a sick guy.
he is a disabled veteran. has M.S. COPD, and now seizures. sometime last week or so.. he broke five ribs. he is just such a positive guy. the nurses in the icu love him. seriously, one asked if she could take him home and care for him. lol.
but all his health issues have finally made my hubs start thinking about his health. whew! finally! I have been begging him to stop smoking for years.. and now. he is!! ok. cutting waaaaay back and using an electronic cigg.. but yay!!!! I'll take it :)

anyone want to see a bunch of teenage girls?

drill teams from all over came to perform at a major league soccer game Saturday. they practiced for about 10 hours. Super long day for everyone 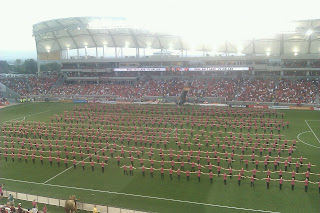 they said they had over 700 girls there! 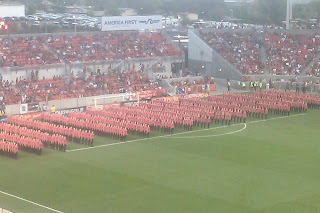 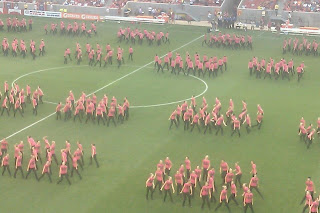 my teenager! she had so much fun!! 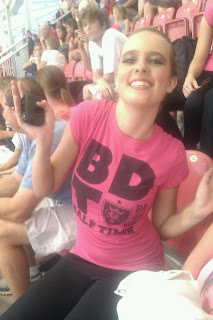 have a great week!

Email ThisBlogThis!Share to TwitterShare to FacebookShare to Pinterest
Labels: goals, my plan, paleo for vegetarians

killin it in the gym

last night, I decided to try my own crossfit workouts again.
and I killed it!
my body is definately telling me all about it today

then repeated this again
and again
then....
added a whopping 5 burpees on the end!
woohoo!!!!

I body was shaking and I almost fell down the stairs of the gym.
yeah. I had to stop a few times and wait for my legs to catch up.
I'm sure the muscle heads at the bottom would have enjoyed seeing arse in the air.
but not this time bitches!

I found an app for my kindle fire that lets me pull up a WOD at random. I have to stick with the easy peasy ones for now, until I get up the nerve to venture down there to play with the big boys. I know I shouldn't care what they think, but as there are only ever one or two females in the "weight" area.. it's a little intimidating.

but when I'm all buff n shiz.. I'll be right there pumpin with the rest of em!
Posted by Sugar at 7:07 AM 2 comments:

I have been so busy doing stuff I forgot to let you all know I have been actually doing it!

I cleaned my house.
yep
the entire thing.
well.
it's not so big.
just a town home
but it is clean
ish

I have stayed up waaaay too late on work nights watching us kick arse in the olympics
go U.S.A.!! woot!
I love the games
so does the hubs
it's like crack at our house
we take bets on who is gonna mess up or who isnt. I know. that's bad.
but it keeps the kids involved
don't judge us.
mostly it's the hubs. I get mad because I feel bad when dreams are broken forever. I really do.
again.
go U.S.A.!!!

I made paleolasagna last night.
it was soooo freggin good
I forgot to take pics.
sorry
I used zucchini and yellow squash instead of noodles.
diced tomatoes and sauce and *sue me* cottage cheese and cheese! I love cheese!!
lots of garlic and italian seasonings and stuff.
oh yeah it was good
I had it for lunch today too
prolly tomorrow too ;)

that's about all I got for now. 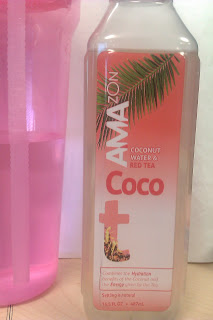 o. m. g. !! yumo!
I was a little nervous. I haven't had much luck with coconut water drinks. ok. I've only tried a couple.
but this one is sooooo good. I am going to stop at the store on my way home and get more!
seriously. it is that good.
thank you amazon water people!
*if you want to send me some to review for my blog.. I wouldnt mind* just sayin