what I was doing this weekend

I made some Paleo chocolates :) 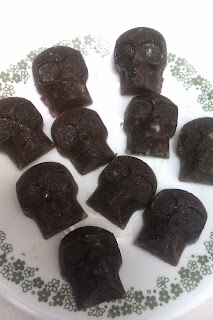 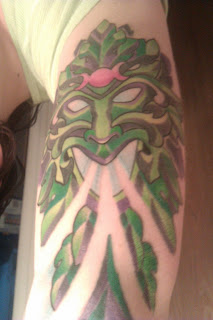 I got my greenman tatt finished. doesn't he look awesome?
it's on the inside of my upper arm..

Friday.. I decided to try a crossfit workout.
wheweeey!
it rocked,  but I am a sore mama still!
I did three sets of each exercise.. I didn't count, I just did as many as I could each time..maybe that was my mistake..
I did box jumps (you squat then jump up on a "box" which I used something the gym had, squats with dumbbells, some wall balls (you throw a medicine ball over your head at the wall then squat when you catch it) some dead lifts, tons of crunches, sit ups with medicine ball throws, bicycle crunches..
whew! I made it through all that.. then managed to run four miles.. I thought I was going to fall off the treadmill lol
so.. I soaked my legs in super hot water with epsom salt.. helped a lil.. not much.. so I rode the bike for 40 minutes to try to loosen up my aching muscles.. then ellipticalled a lil..
still sooooo sore! you should see me trying to get in and out of my car! ha!
but I am not going to give up. nope. I will just work upper body until I can stand to move my lower body voluntarily lol 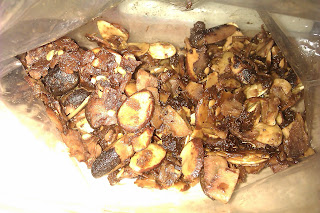 Email ThisBlogThis!Share to TwitterShare to FacebookShare to Pinterest
Labels: crossfit, paleo for vegetarians, working out

squeee!!
for once.. I didn't lose and then gain the next week..

I stayed pretty much the same.. maybe a fourth of a pound down...

I wasn't expecting much this week since I've been so super busy with dance recitals and such.. I have't exercised as much as usual. like twice lol

but I am happy with staying pretty much the same.

I've stocked up on more "paleo" friendly foods so this week will be great!

I've also found a "friend" locally that is doing the same thing..
she rocks!

she's a coworkers wife and soo awesome! Were friends on facebook! tee-hee

she loves Crossfit.. so I think I am going to start that..
I might go to the local crossfit gym for a few visits to get the hang of it..

Email ThisBlogThis!Share to TwitterShare to FacebookShare to Pinterest
Labels: paleo for vegetarians, weighin in

for our local half marathon!!!

I am going to make a shirt I think.. to honor my mom.


Happy Solstice to all that celebrate :)

have a bonfire
make some faerie gardens or homes
bless your tools
perform some rituals
pick and press some herbs
make some sun catchers
enjoy your day!


so...
here's to a new week and hopefully another loss!!

I totally won't expect such a big one.. but a loss would be great!

hardly any i.b.s. issues.. which I have had for years..

I'm off for a long weekend. We've got a company party tomorrow at our local amusement park.. then the Zoo with the fam Saturday for Father's day.. and it's the Elephants b-day :)
then Sunday.. Bike shopping and spoiling the hubs

have a great weekend everyone!
Posted by Sugar at 7:20 AM 9 comments:

I think I found a better way to share my data yay!
here's yesterdays info...

not too bad.. I think I need more calories and protein.. I'm working on it
Posted by Sugar at 7:53 AM 2 comments:

Email ThisBlogThis!Share to TwitterShare to FacebookShare to Pinterest
Labels: food tracking, my plan, paleo for vegetarians

I survived day one!
although..
I did cheat when I got home..
my teenager made coooookies..
so I HAD to have one!

but I still made good dinner choices and came in under my cal goal...a little over on the carbs.. but I'm a newbie!